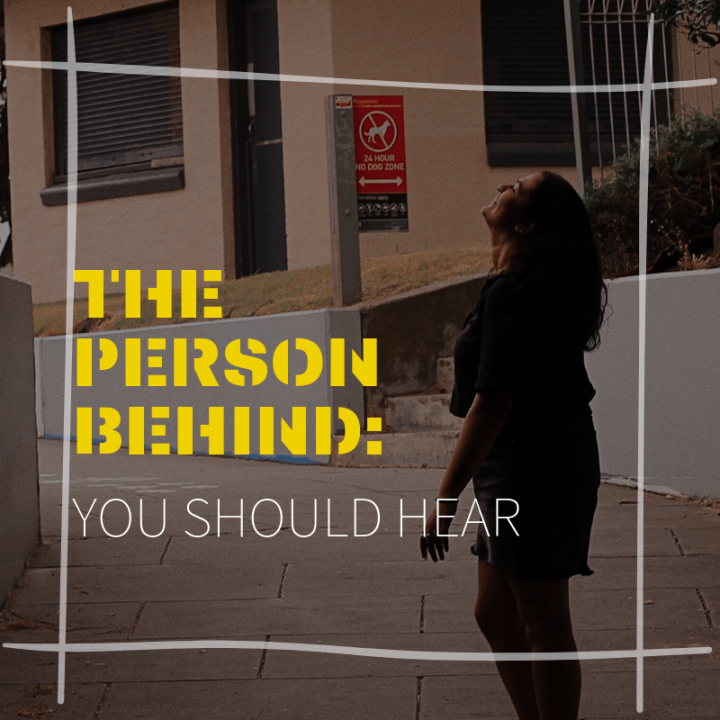 It’s finally here; Season 3 of The Person Behind.

And to kick it off, we have Priya Francis, the person behind the music blog You Should Hear, in the house!

Having just released a new single titled “Tell Me”, the just 20-year-old singer and songwriter gives us some background information on the song’s meaning, some of her musical inspirations and future projects of both her blog and her music.

Life’s pretty good at the moment!! I’ve been at work quite a lot which I kinda love, developing my music, performing a bit more, university is about to start which I’m excited about, so everything’s going well, I like where I am.

Tell me a little about You Should Hear. When and why did you decide to kick it off? How has it benefitted you since?

You Should Hear is basically the way I share my love for music. I started it during my first year of university because I was really listening to so much music, curating too many playlists and recommending music for all my friends that it became an obvious option. It genuinely started because even I got sick of hearing myself saying ‘you should hear ….’ whenever I told someone about an artist I stumbled upon or a song I was enjoying.

My mum and dad have also been really vocal in the fact that I should try and pursue something that incorporated writing and music so once I finished high school and was pretty solid in my uni routine I just decided to start it! I didn’t tell anyone for a few months, kept it pretty low key but now everyone’s really supportive.

It’s benefited me heaps, I’ve got to chat with some amazing musicians, made some PR connections, made some FRIENDS, it’s really given me another passion to follow.

We are primarily here to discuss a new song you released; “Tell Me”. Can you maybe give me a step-by-step guide of your process when it comes to writing, recording and producing songs?

To be fair, the process kinda changes every now and then but it goes along of the rough lines of starting with either a main idea or a really short line that comes into my head, which I build around. Otherwise I’ll play around with my guitar for a bit and find chords I like and try writing to that. I also have a whole load of back-up lyrics and melodies in my Voice Memos app on my phone so if I’m really stuck for something I can recycle some of those or try and take them further.

Tell Me was quite unique in that I didn’t actually intend to write a song the day I wrote it, rather I was trying to learn another song and stumbled on those chords, and the lyrics genuinely came out in 15 minutes. I think within the next two hours I’d recorded the guitar and added the vocals in GarageBand for a really quick demo and sent it to my friend Jarrod who produced it!

What is Tell Me primarily about and what does it mean to you?

Tell Me is about not really having the time or the energy to deal with emotions that you can’t seem to control. For me it was written at a point in time when there was a lot going on around me and I found myself caring and worrying about everything and everyone else, to the point where I was losing sleep, which obviously isn’t healthy at all.

Like I mentioned before, I wrote the same based around a very specific few weeks, so the song is about how I kinda struggle with stepping back and removing myself from situations when they become too much I guess. As great as it is that the song is so accessible and relatable for so many people, it’s one of the most specific songs I’ve ever written.

In your opinion, does music also have a therapeutic side to it?

100%. I’d probably go mad if it wasn’t. Not even writing songs and creating songs but just listening to music. I probably spend an hour minimum each day doing nothing but listening to music, and I feel like my mental health and emotional health probably wouldn’t be the same if I didn’t. Music can do so much you without you even realising.

Who are some artists that you draw inspiration from?

Hard one. Very hard one. Kehlani for sure, Jon Bellion, I feel like everyone and their mother is so sick of hearing me say his name over and over again, Alec Benjamin because his lyrics are insane, Stevie Wonder, H.E.R, Lauryn Hill. There’s a ton, people I could literally talk for hours about, but I’ll keep it at those ones for the moment.

Good question. I think my personal ideal would simply be one where men and women were treated equally. Just things like the type of questions they’re asked in interviews, the way tabloids and the media focus on them, the type of language that’s used, LINE-UP RATIOS, all that good stuff.

That said, I think there are the needed steps being taken, like I mentioned in the article. Things like people calling out inequalities in festival line-ups, calling attention to the media and the stereotypes they enforce, female artists taking control of their images and reputation, it’s all steps leading towards a much bigger goal, and we’ve already gotten further than we’ve ever been.

You have a music blog, make music yourself and are working on getting your BA in Music Industry… it’s safe to say that music is a big part of your life. What is one of your fondest memories of music, your passion for it and the feelings it manages to evoke in you?

I honestly couldn’t pick one of my fondest memories of music entirely. If I’m thinking very recently it would have to be one of the smaller gigs I did with my friend and guitarist Daniel at a bar we play at often.

We performed a couple of songs towards the end like Waiting On The World To Change by John Mayer and Somebody To Love by Queen that we hoped would get people a bit into it, and everyone watching completely blew us out of the water with how encouraging and enthusiastic they were, like I just sat back for an entire chorus and let them all sing, it was great.

What can we expect from You Should Hear in the future and are any exciting projects coming up music-wise for you?

I’m hoping to keep the momentum going with You Should Hear during my final year of uni, it’s been a great portfolio of sorts to present to possible employers who appreciate that type of work so expect some more interviews and plenty of live music reviews and wrap-ups.

And in terms of my own music, that’s probably one of my biggest focuses this year so you can definitely expect some new music to come in 2019.

A big thank you goes out to Priya for not only being part of this series but for also being one of the most supportive friends I was fortunate enough to make through this platform.

If you haven’t done so already, head over to her blog as you are bound to find something you like. From music recommendations to interviews with different artists, You Should Hear offers a diverse music range like no other.

And while you’re at it, check out Priya’s latest post in her “Courtesy Of” series for which I sent Priya a list of ten of my favourite songs.

The Person Behind is an interview series dedicated to shedding light on different creatives and their creative outlets. The series aims to not only introduce readers to diverse mix of content creators but also to explore how the digital age has influenced the way we choose to express ourselves nowadays.

14 thoughts on “The Person Behind: YouShouldHear”